I’ve tried a few different methods of logging my completed tasks (notebook, notes app, a different notes app), but the friction of opening the book/app, finding the note, and logging the task was too high and I always abandoned the effort after a week.

Here’s how it works:

Of course, you need Alfred and Things installed for this to work. They are tools I use every day. I highly recommend them.

You can customize the link however you like, by adding tags, projects, etc. I keep it simple and just have a completed task.

Want to use this? Here is a URL to add this directly to Alfred. (It will only work if you have Alfred installed.)

Yesterday was my last day at Crash.

A little over three years ago Isaac emailed me one morning asking if I had a few minutes for a phone call. I took it, then a month later I started full time at Praxis. A year and a half later we split the company and I went with the Crash team.

I’m very proud of the things I worked on with both teams. Here are a few highlights:

In addition to the above, I learned a ton about:

I’m thankful for the time I had with these teams and what we worked on together. It was exactly what I needed at the time.

So why am I leaving?

I’ve been on the edge of burnout for the past 6 months. My role changed many times in the last three years. I’ve adapted rapidly to the changing needs of the company, wore many hats, and figured out a lot of stuff. That was fun for a while, then it got pretty taxing. I decided at the beginning of February that it was time for a change. I want to settle down into one role.

It is hard. I’ve poured my heart into these teams for the past three years. It is not an easy decision to walk away, but I think it is the best decision for me, my health, and my family.

I used the Crash philosophy to go land a new role. I did my research, crafted a personalized pitch, and sent the pitch in along with the regular application. I got an immediate reply and threw myself into landing the role through the trial.

I have a long history with WordPress. This very blog started on WordPress back in 2008, and I’ve developed at least 30 WordPress sites since and helped Praxians with ~200 more. CookLikeChuck.com runs on WordPress, the Praxis curriculum portal runs on WordPress, and Crash’s content is powered by a decoupled WordPress instance. I’m a steadfast remote worker, and Automattic is one of the largest fully distributed companies, with 1100 people across 75 countries. I resonate deeply with their Creed and Open Source mission.

Thankfully, it worked out. I’m joining the WordPress.com Special Projects Team, working to empower people who are doing cool things, one website at a time.

I start at Automattic on Monday.

At The Remnant: Radical Individualism, Satisfaction, and Irresponsibility

How to Learn New Software Quickly

I tried to add user authentication with EmberFire and Ember Simple Auth. I get through the provider workflow with Twitter, see a new user in Firebase, see the correct user data in the network panel in Chrome, and the ember_simple_auth-session cookie has “authenticated” in the content field. But session.isAuthenticated never seems to be true.

I must be doing something wrong, but I don’t have the time to figure it out today. Time to keep packing. I’m buying a house tomorrow and moving in this weekend!

After some frustrating trial and error and searching through docs with lots of words I don’t quite understand, Dave Wasmer kindly helped me figure out how to get Ember Objects (the results of Ember data queries) in a format I’m used to working with: Something that looks like a regular array of objects, or “POJO” as Dave said.

The solution ended up being calling the map method on the array-but-not-really-array and toJSON on each item in that. Then I get something back that looks like [{name: ..., startDate:...}, {...}]

This allowed me to render the charts with Ember Data stored in Firebase.

Tomorrow: Digging back in to D3’s update pattern and getting the chart automatically updating when adding a new plant. Dave’s helpful suggestion was to look into the “data down, action up” pattern.

So that means I set up Firebase and EmberFire today. It was surprisingly easy! The quickstart guide was solid. I was saving Ember Data to Firebase and retrieving it in my routes in no time.

I modified my Add a Garden form to save to Firebase, then transitioned to the Edit route where I passed along the ID of the garden I just created an retrieved the garden record’s data in the route. Then I read the Ember Data relationships docs and was able to both save and retrieve a garden’s related plants.

Then I got stuck: I tried to pass the plant data to the calendar component to render the chart and I can’t get it to work. The data isn’t coming through as I expect. I assume it has something to do with relationships in Ember data as promises, but haven’t quite figured the solution out yet. So that will be tomorrow’s project.

I feel like I’m making progress, though! It was super satisfying to see my collections and documents appear in Firebase.

I thought I’d be able to get it all working locally before setting up EmberFire and Firebase, but after seeing that IDs for Ember Data are usually assigned on the server and having a talk with with Dave Wasmer and Ilya Radchenko, it sounds like I might be better off setting up Firebase now instead of trying to get Mirage to work. That is a little more than I have time for today, so that will be tomorrow’s goal.

Day 8! Another short session of work on a plane before I go home and pack up my apartment. Today I finished separating different functional parts of my components into individual components and started integrating Ember data.

I hit an issue I wasn’t able to research since I wrote it only a place without internet access, so the below might be wrong.

Day 7! Today I’m traveling, but I got some work done on the plane: I figured out my routes and started breaking apart components to their individual functions.

I also tried to fix a bug with the color picker where it wouldn’t close, but didn’t solve it.

Amanda gave me another good idea today: For items like tomatoes, it would be good if there was another bar at the end that was lighter to signify a harvesting time window.

Day 5! I didn’t think I’d make this much progress today, but I’m happy I did.

Instead, I had to use d3.max and offset to create a custom function to look at all of the plants and see which one would be harvested last:

Here’s how it works so far!

Making the chart responsive took me down a weird rabbit hole. I tried using a computed property and then a bunch of different addons, but none of that worked. So I went the old-school route and wrapped the chart drawing in a function and then added an event listener to remove the chart and redraw it. There is probably a more elegant way to handle it, but I don’t know what it is.

Resources that helped me:

Day 2! I woke up excited to work on this and spent an hour on it before work.

Figured out the basics of the D3 implementation for Plant Gantt:

Here is the Observable notebook.

Get back into Ember land and figure out how to incorporate a chart with mocked out data in an Ember component.

I’ve wanted to do Advent of Code for a few years, but I just can’t get excited about random puzzles. Not knocking all the folks involved in it–more power to you! It just isn’t for me. So I haven’t participated.

Last week while flipping through a seed catalog to figure out what I’m going to plan in my garden next year, I had an idea: I want to build a plant starting/harvesting calendar for my garden. Building that will be my own Advent of Code project this year.

Plant Gantt. Amanda came up with it and it is perfect. A gantt chart for plants.

I may not get this done in 25 days, but I intend to make progress every day. It will be tough with the month ahead: Two out of state trips, moving into our new house, and holiday parties. I’ll carve out time every day to get some work done, though.

I find myself regularly scouring business websites for logos to use. More and more of them use build pipelines that take all SVGs and embed them inline, making it impossible to just right click and download the image.

Here is my short workflow for downloading inline SVGs:

Note: I still use steps 3 and 4 even if my end goal is SVG. First, I want to make sure the colors are correct. Second, Sketch adds some important attributes to SVGs like Viewbox that are helpful if you are using the file on the web.

Here is a video I made walking through the process:

A Case Study in Workflows and Productivity: Chuck Grimmett

Chuck Grimmett at Makerpad: How Crash fortifies its engineering team with no code tools

I transitioned by previous book notes section to a new reading list section. Why?

So, I decided to implement Frank Chimero’s design with my own reading list.

Instead of just hardcoding them in a page and repeating tons of HTML for the rest of my life, I decided to put the reading list in a Jekyll data file (I chose yaml) that I could easily add to and make a simple template to output.

First, I started with my previous book notes section. Since they were stored in a Jekyll Collection, I was able to write a quick Liquid for loop to generate most of my list for me. But I didn’t want to: include a full star rating, just a recommended star. So I chose to star books that I rated 5/5:

Awesome! That spit me out a list of everything I’ve written book notes for. Since it is sorted by date in reverse chronological order, it was quick for me to manually break it up by year:

Once I added the “last updated” key, the yaml structure looked like this:

Here’s how I loop through that data to create my reading page:

Note that {{entry.books | size}} line: This is what outputs the number of books I’ve read in a particular year by spitting out the size of the books array. This is one of the big benefits of using a data file instead of hardcoded HTML or markdown. Just add a new book and everything else updates itself. Plus, I can use the data file for other things later if I so choose.

Here is the result: 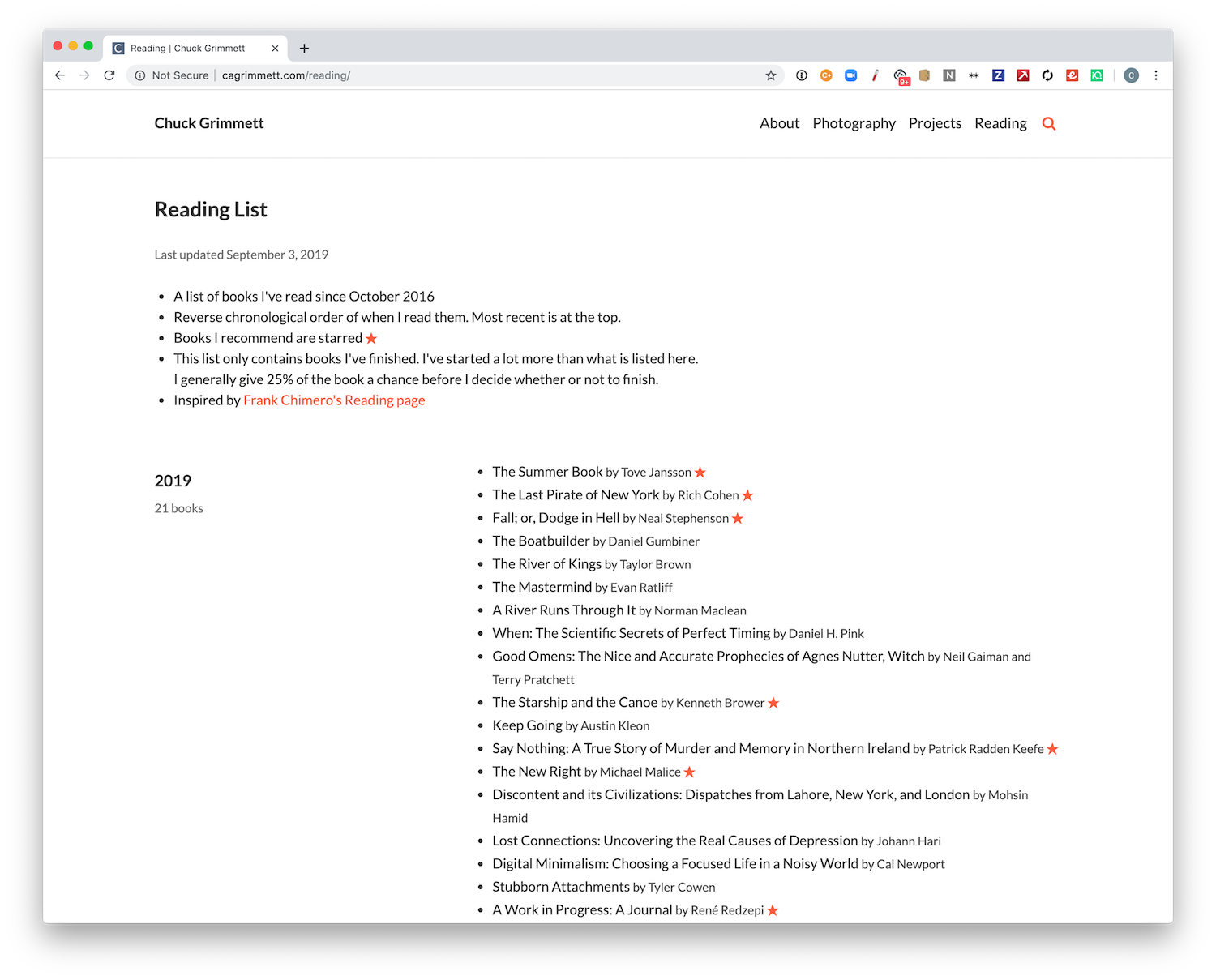 You can check it out over at the reading list page, or you can see the code over at my Jekyll Tools Github repository.

If you liked my book notes, don’t worry. They aren’t going anywhere. I’m keeping the pages up for posterity, but I’m not updating them any more.

I’m on the WordPress.com Special Projects Team at Automattic. I also blog about food and drink at Cook Like Chuck.